What's the best way to report a whole spam account?

Then under "What Can We Help With", choose "report a policy violation", then report spam. 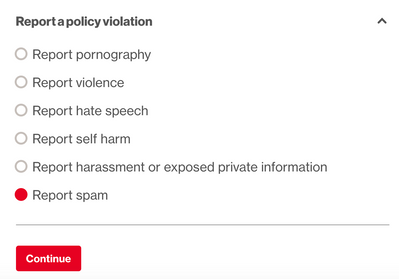 For guidelines on what Pinterest considers as spam, check out: https://policy.pinterest.com/en/community-guidelines#section-spam

I tried to contact Pinterest using the link provided by @PinterestGabby  but they just send me canned responses re: "natural ebbs and flows of traffic" and pinning more "fresh pins".

And every time I try to reply, it creates another ticket and I get another email saying my "message didn't get through".

So I tried to contact them again using this:

And I got a response and was able to reply to their email. They're much more helpful than the ones who responded to me using Gabby's link (which, I believe, is under "measurement and analytics" section– they just brushed me off with canned responses.)

As potentially another data point here, I unclaimed my website several days ago and reclaimed yesterday. I've been able to see that several of my existing pins are now showing up in search (ranking near the top), although my blog traffic hasn't come back yet, but i'm cautiously hopeful. I'm fairly new, but I enjoy pinterest and the visual search approach and I'll be really happy if it works for me as a food blogger to drive traffic to recipes.

Given the experience of pins that show in search, then suddenly don't at all, then do again after reclaiming website. I believe there is a technical issue of some kind (either algorithmic or flagging) impacting people here, despite the tech support responses about 'ebbs and flows'

Hubby, who works in the software field has 'his money' on an interaction between algorithmic changes relating to fresh pins (and image similarity logic in that) and spam controls (which must be tough to control the relentless attack of spammers on any anonymous platform). Whether this would work or not, his suggestion (probably into the ether) would be that requiring business accounts to verify real world identity and disallowing common spam tactics, like affiliate linking with known url patterns (especially for non verified accounts) might help everyone 🙂

I started acutually working on my pinterest account a year ago june with 16,700 views. I worked very hard with fresh pins and movies and got it up to over 3,000,000 somewhere last June. Now I am down to 2,000,000 and still working like mad to get my numbers up. I do a ton of fresh pins because I like making them. I make little movies and have listened to the people at pinterest and stopped using my group boards hardly at all. I am so upset because I work so hard. What is going on here. I don't want to go to another platform because I love making the pins. I am just very upset. Is the photo below enough to lower my views by 30 percent?

Your graph look like normal ebbs and flows to me.

Every time you see a spike in traffic, it's quite common to see a drop afterwards. But the overall graph should be trending upwards.

This is my graph of traffic from Pinterest since I started last year in June-July. The overall trend is upwards. Except for the last couple of days when traffic dropped 90+%

They have cut the free traffic already starting from April, leaving about 10% free, as already did the other social networks, for example Facebook, before Pinterest.
Pinterest always introduces changes to "IP's blocks" to "look less conspicuous".
If someone hasn't had a traffic reduction yet, it will happen in the future.
And even if new accounts will see a significant increase in impressions, at some point Pinterest will put a cap on.
Same thing if you try to upload videos and stories: thousands of views the first few days, and then have zero or little more.
Don't waste time opening tickets or requesting assistance; it's all useless and you will only get misleading answers.

If it's "normal", then why does it only happen to a small portion of users?

With millions of users on Pinterest, why does it only happen to less 1% of the users?

If you're giving up on Pinterest, then why are you still here?

I have no delusions of thinking I would just recover my traffic, but I sure as hell won't give up without trying. But that's just me 🙂

We're using their service for free in return for us giving them our content. If it's all "useless", then Pinterest strategists, VAs and all those folks using Pinterest as their bread and butter would surely have no jobs right now, don't you think?

When I started working on my Pinterest account last year, people were already shouting "the sky is falling", Pinterest won't give you free traffic anymore, lots of accounts were erroneously flagged for spam, etc. etc.. Guess what, I still managed to grow my account from 0.

So yeah, this is just one of those unfortunate situations, but certainly not a reason for quitting. A shift in strategy maybe. But I won't throw in the towel just yet. 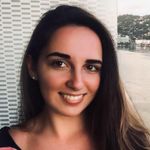 Just thought I'd jump back in here seen as my posts have been quoted/screenshotted a few times.

Way back in April, literally overnight, my impressions dropped from thousands to single digit on all NEW pins. Old ones were still okay and were being saved.

I was told there was no flag or block on my account about 10 times in total. But, it turns out there was indeed a flag on my domain.

My domain was flagged as spam by mistake due to a faulty spam filter. Fortunately, I had one super helpful agent who tried everything possible to figure out what was going on, and they found it!

They sent my case to the specialist team who then 'did something on the back-end of my account to get my impressions back to normal as fast as possible'. At least that's what I was told by support.

Within 24 hours, my impressions were back to normal and my new pins were being saved and seen again.

I think I sent around 45 emails in total for my account to be fixed. My account was hit on April 27th and was fixed by June 1st. I absolutely think it's worth checking if your domain has been flagged as spam by mistake especially if your old pins are still being saved/seen. Never hurts to try.

I'm tagging @imfierceafter40 and @allaboutbabyblog here too as both have experienced the same thing as me, but I believe their accounts are back to normal now after a fix from the specialist team.

I don't know if this is the same thing everyone else is experiencing, but thought I'd share my story to help.

@curling_diva I agree with you! Remove the little business people like us and Pinterest will have only big clients posting the same things over and over again (home decor and more home decor). If that is their business strategy, good luck building your audience.

However if things don't change my Pinterest Marketing business is dead (I'm not taking on any new clients right now while my own personal Pinterest is tanking so fast and I can't figure out how to fix it, so I'm 100% not putting any new clients into a similar situation). I'm not giving up on it just yet, even if I have to go public with our issues somehow to get heard.

If we keep flooding the customer service desks maybe we will finally get results! Fingers Crossed! 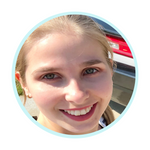 @typicallytopical thanks for the tag 🙂

I got accidentally caught up in the spam filter a few months ago. I had no idea what was happening until I reached out and it was discovered and corrected.

All my stats would just slowly drop and drop and drop some more with me being clueless what's going on so I would always advice to reach out to pinterest.

I know right now all the responses seem not very helpful and who knows what's going on behind the scenes.

My best advice right now would be to regularly make new pins, pin less rather than 20 pins a day and stay consistent until this is hopefully resolved soon.

After my account was corrected it slowly went back up, I just changed my whole strategy again tho so I can't say how good that solution was 🙂

I hope for everyone here experiencing major traffic drops that everything will go back to normal soon!